The EP is set for digital release on August 9.

Mixed by Greg Fidelman (with help from the beautiful Sara Killion), except ‘333 Revisited’ which was mixed by Ryan Hewitt.

Drums were played by Stella Mozgawa on ‘Pedestal Of Infamy’ ‘A Little Bit Of Sanity’ and she also rocked a couple of little toms on the beginning part of ‘333 revisited.’ Stella Mozgawa appears courtesy of Rough Trade Records Ltd.

Jack Irons played about ten seconds of rad drum roll on ‘333’ at around the 4 minute mark, and Chad Smith and Jack played drums together on ‘Lovelovelove.’ Chad Smith appears courtesy of Warner Bros. Records Inc.

Tree sauntered in with chromatic harmonica at the end of ‘Lovelovelove.’

The Silverlake Conservatory kids and adults choir sang together on ‘Lovelovelove’ they were directed by S.J. Hasman who got the whole choir thing together. 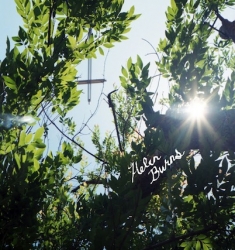